My friend Guo Jian texted me from Beijing a few months back just saying “New York Times today”. A quick Google showed up this New York Times article about his latest work, a rather brave thing to do in the current difficult climate facing artists in China. Guo and I have been friends since the mid 90s when he first started showing with Ray Hughes and not too long after we first moved to Wallerawang he came up here and lived with us for a year before returning to live in Beijing. While he was here we did a work together which was shown at Slot Gallery in Redfern in August 2005. 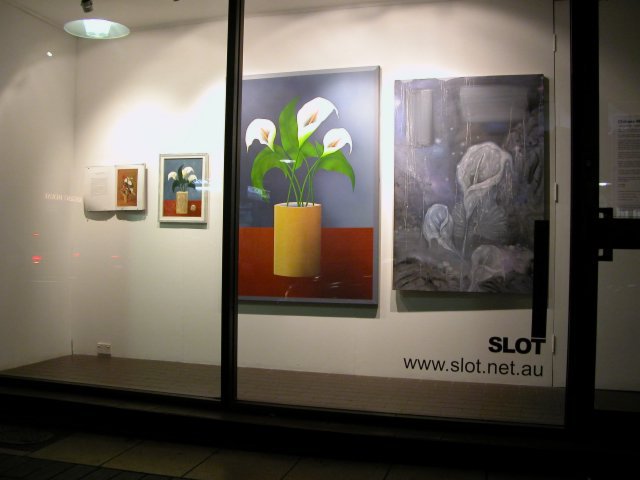 The work was in five parts. The first part was a book of flower paintings by Australian artists that my mother used as a source book for her paintings. She is an amateur painter who almost invariably paints flowers and often copies other artist’s paintings. You could say she was a Sunday appropriationist. 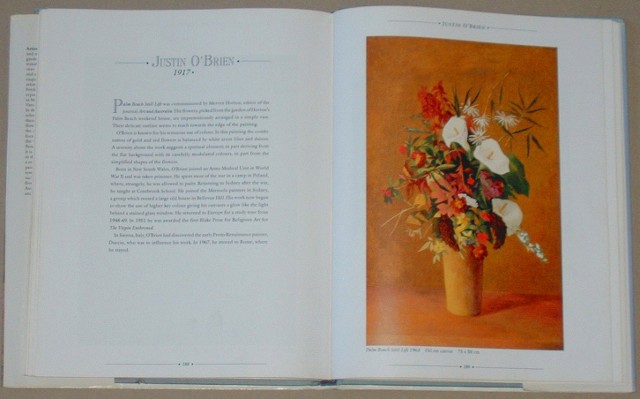 The second was a painting she had done in the late 1990s based on an illustration in that book although I only discovered its source after I had painted a version of her painting which at the time I thought was entirely original. The painting was Palm Beach Still Life by Justin O’Brien which in an ironic addition to the Chinese whisper I misremembered as by Adrian Feint. She had only used the canna lilies from the painting and she had added a small ornament that she owned. 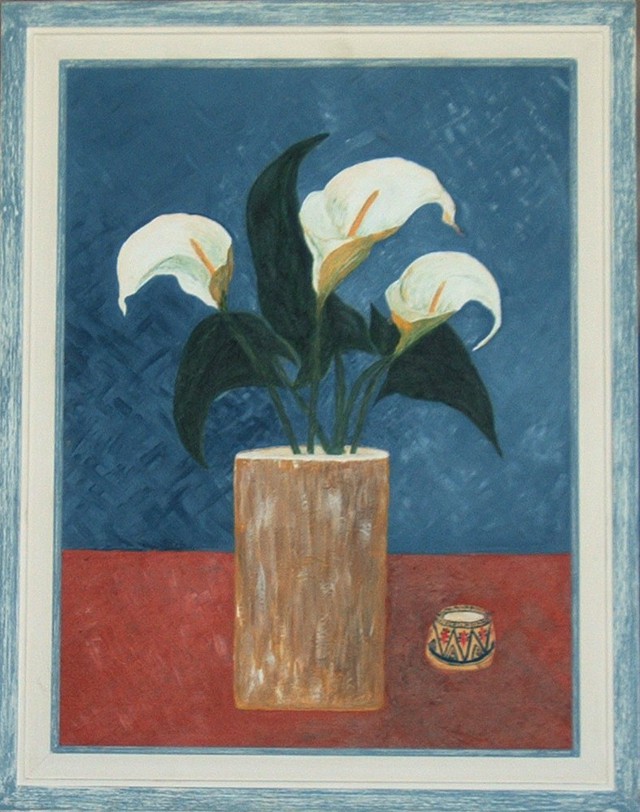 My painting was based on her painting although it was much bigger and I edited a few bits out. I painted it in 2000 just after I had returned from several months in Florida where for the first time in my life I had an exhibition of paintings. She had looked at the photos of the exhibition and repeated something she had said to me before, “Why don’t you paint flowers? People always like flowers.” 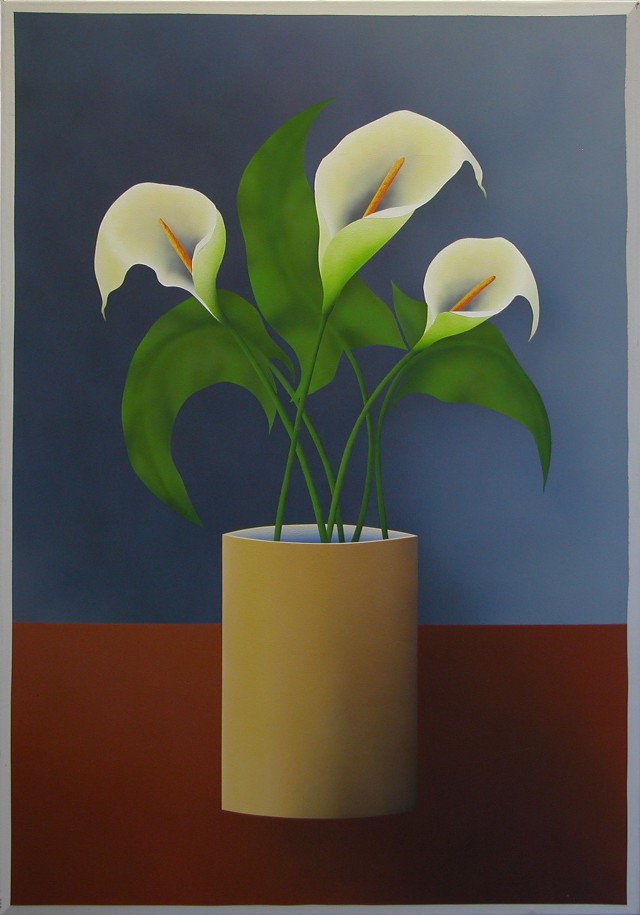 Later in 2005 when Guo Jian was staying with us he saw the painting and when I explained its story he said his art teacher also had told him that he should paint flowers because people like flowers. So he then did a painting based on my painting but without seeing my mother’s painting or the Justin O’Brien it was based on. 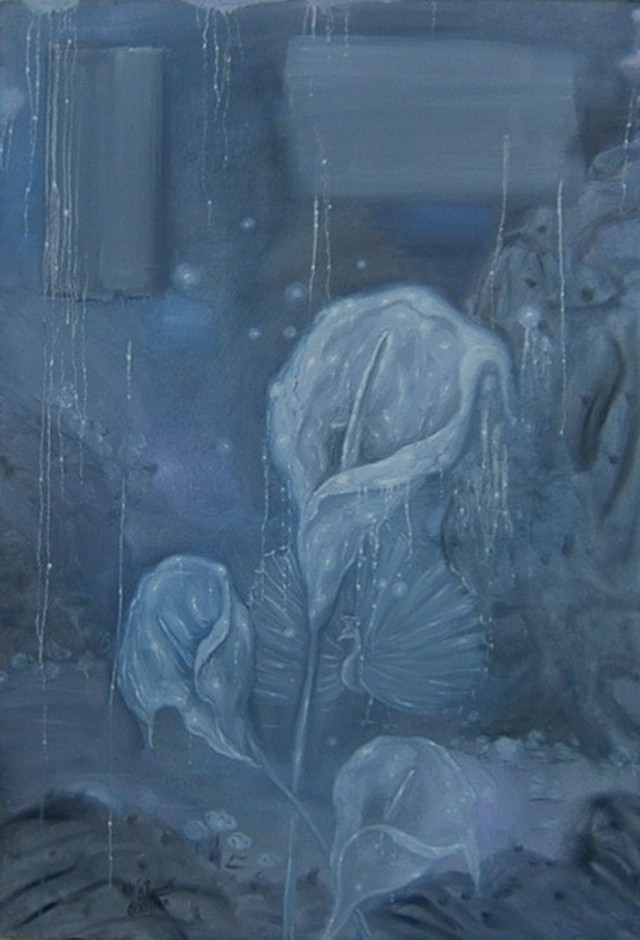 What we had by this time was a fairly clear example the game of Chinese whispers where the last version is almost impossible to recognise from the first version.

I added one further element, a statement that was in itself a further version in a way because it added a political interpretation to the whole issue of truth, lies and misunderstandings

“WAR IS PEACE. FREEDOM IS SLAVERY. IGNORANCE IS STRENGTH.”*

This exhibition, or perhaps, this work, had its origin in something my mother said ten years ago – “You should paint flowers, people always like flowers.”

My mother paints flowers although often she is a sort of appropriation artist, painting not flowers but other artist’s paintings of flowers.

I never paint flowers but I decided I would follow her example. I copied one of her paintings, a simple painting of three calla lilies in a vase. My painting was much larger, slightly sinister in its sharpness and harsh colour. It was only later when looking through one of her books that I realised that she had herself consciously or unconsciously copied parts of a 1930s painting by Adrian Feint, a mixed bouquet of flowers in a vase. Among the flowers were three calla lilies which resembled those in her painting.

Sometime later my friend Guo Jian told me that his art teacher had said exactly the same thing to him, a piece of advice which Guo had ignored. He then painted a painting based on mine without having seen my mother’s painting or the original Adrian Feint painting. His painting is the monochrome grey of dreams, hallucinatory and foreboding.

We live in a culture of Chinese whispers, a phantasmagoric world of lying murderous leaders, self deluded followers and manipulative propaganda from all sides. Try as we might, it is impossible to discern the original truth simply by studying the latest insanity, only knowledge of history gives you a thread through the maze.

Looking at our paintings I felt that unintentionally we had created a type of visual Chinese whisper, a cross-generational collaborative work of interpretation and misinterpretation symbolizing that dilemma.

But there is another whole aspect to this flower painting lark. I’ve never really had artistic heroes with one exception, I’ve had a lifelong admiration for Vladimir Tatlin who navigated the cultural and political nightmare of Russia first as a constructivist who then turned to a sort of industrial design,  produced the splendidly satirical Letatlin flying bicycle (with such a straight face that he was never sent to the gulags although he should have been) and finally spent the last ten years of his life painting the gloomiest flower paintings ever. It seems pretty clear that this was the only option left for him if he was to survive Stalin.  Tatlin’s career is rarely discussed in the West beyond his famous Monument to the Third International (as his wikipedia entry demonstrates) but I would rank him with Picasso and Duchamp as the greatest artists of the early 20th century.

I was discussing this with Iakovos Amperidis when we were trying to work out what we could do to support the campaign to free Ai Wei Wei. We never did anything in the end but we worked through several possibilities until what we came up with the idea of building a site where we would invite artists whose work is conspicuously politicised to contribute a flower painting. We wanted to highlight the fact that politicians, be they Stalin or Kevin Rudd (see his idiotic comments on Bill Henson) would like restrict us all to  painting dull flower paintings. We would treat the invitations, which would be limited, as a type of award for conspicuous political bravery. 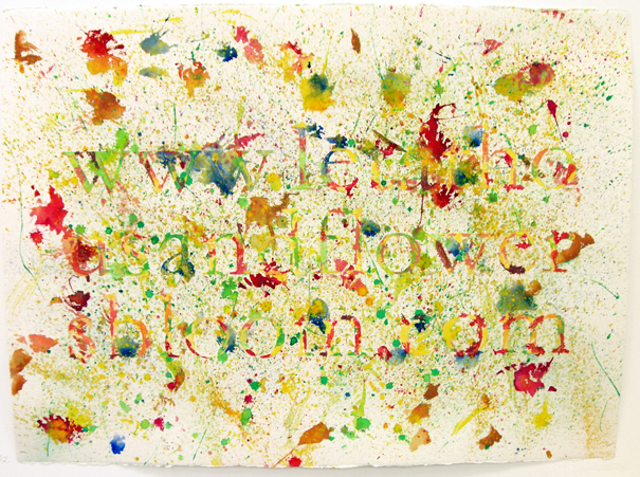 The site was to be called letathousandflowersbloom.com after Chairman Mao’s infamous 1957 speech inviting critical discussion of the Chinese Communist Party’s policies – everyone foolish enough to take up the invitation was killed or imprisoned. We haven’t done it yet but the domain name is registered and it is on the list of future projects.