I produced a lot of work between the late 1960s and early 1972 when I stopped showing in galleries. There are at least 1200 drawings still in existence from this period, mostly for works that have never been exhibited. The works that were exhibited are usually just one of a series of variations and there may even be multiple drawings for each of them, usually a very rough sketch, a more formal drawing and sometimes even more finished drawings that could be described as art works in their own right. Oddly enough they are almost the only finished works from that time because almost from the start I treated drawings as manufacturing plans in the expectation that the finished work, even when they were hard edged shaped canvases, could be destroyed and recreated multiple times.

This work from 1970 is a typical example. It was first shown in the Contemporary Art Society Annual Exhibition at Farmers Blaxland Gallery Sydney. The show opened on October 28, the day before my 20th birthday.  Even though Walk Along This Line which was shown at almost the same time is now better known, this work received more publicity at the time. 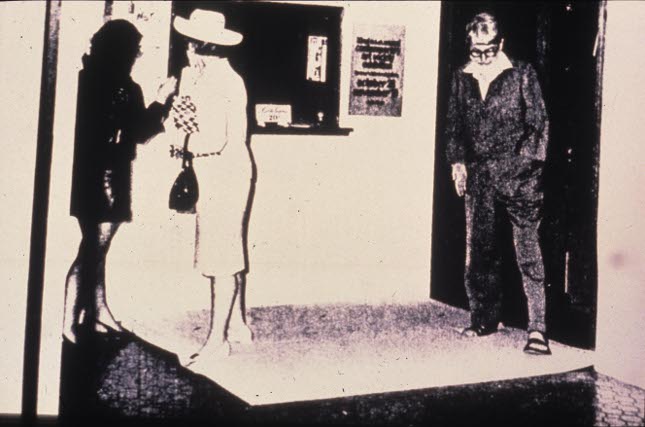 It consisted of two sheets of foam rubber 3 inches (75mm) thick with my name and the date stencilled on each end. There were two pieces because it was not possible to get a single piece wide enough for the door.I stencilled the name and date was because at this time I still felt a need to do something that indicated in some way that this was a work of art. I have dropped the stencilling when the work has been remade for later exhibitions. Also at this time I used yellow foam, in later versions it has been pink or blue, simply because the colour is irrelevant.

The work received some mass media shock horror attention, as did John Armstrong’s and Neil Evan’s 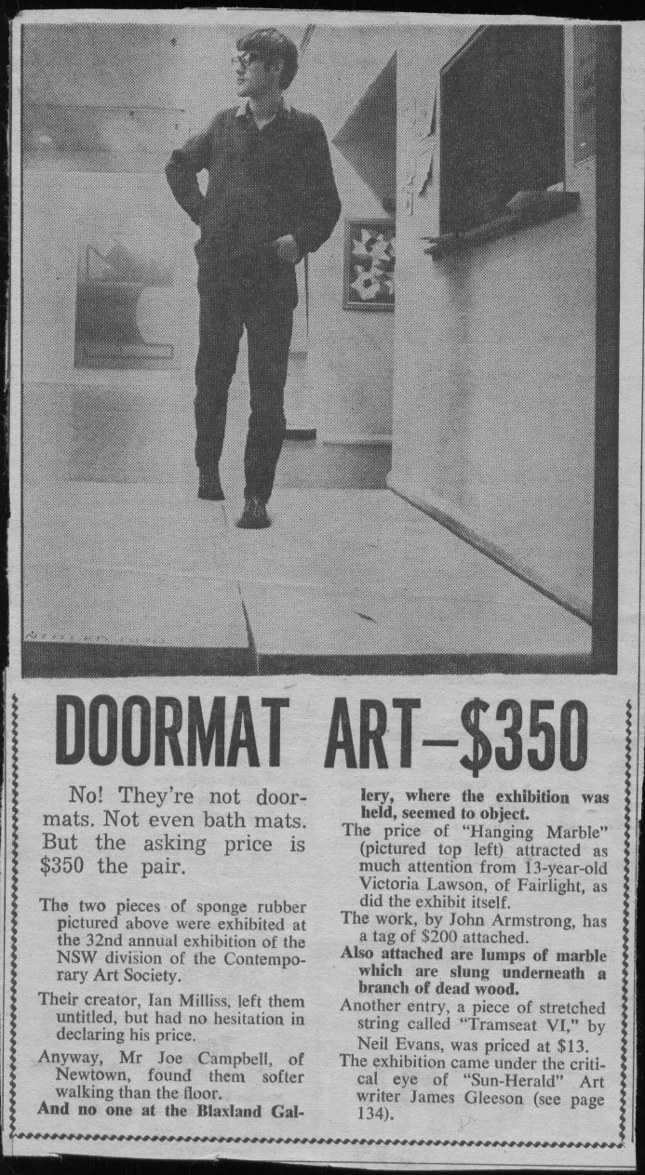 and I was also interviewed several times for radio, a nasty experience as it turned out, leading to my first realisation of how smarmy and untrustworthy journalists can be and how straightforward statements can be twisted in order to ridicule you – nothing much has changed there except for the worse.

Only two months earlier James Gleeson had devoted an entire lengthy review to condemning me, starting off with:

The more comfortable line of approach would be to accept Milliss as juvenile joker – he is barely 20 – and let it all go with a laugh.
Yet when one begins to probe into his ideas … the uncomfortable conviction begins to emerge that Milliss is serious and is concerned with some fundamental issues about the nature of art

This time, faced with several more like minded artists he feared for the future of western civilisation:

He wants $13 for a piece of string

At the thirty-second annual exhibition of the New South Wales division of the Contemporary Art Society at the Blaxland Gallery there is an exhibition (Catalogue No.13) by Neil Evans called “Tramseat VI”.
It is a piece of string stretched below an awning in the Gallery – nothing more. Price: $13.
Ian Milliss exhibits an untitled work of two mats of sponge rubber at the entrance so visitors must walk over them. Price: $350.

CRISIS
Peter Kennedy shows four photographs of sheep at a reasonable $50, and John Armstrong has hung some pieces of marble from a branch of dead wood for $200.
They are works of so-called Conceptual Art.
As one who firmly believes art should be an open-ended process, and that it should be the inalienable right of artists to explore to the limits of their imaginative reach, I would be the last to reject such works on the very dubious grounds that they had nothing whatever to do with art.
They are concerned with art, but their ideas about art are such that their work bears no immediately recognisable relationship with anything hitherto passed for art in man’s long history as a creative animal.
It might be wiser to give such works a different designation.
If we call them “quasi-art” or “quasart” it might help overcome the kind of mental boggling that occurs wen we try to accommodate Evans’ piece of string and Michelangelo’s Sistine Ceiling under the same umbrella wrd – “Art”.
Wrappers, like Christo, earthworkers and conceptualists like Evans, Milliss, Kennedy and Armstrong, are quasartists because they have rejected all modes, elements and techniques of art as it has been understood to the present day.

TRADITION
Others, like the minimalists and colour-field painters, reject most things, but remain linked with tradition through their interest in, and concentration on, colour – one of the most abiding elements in art.
If quasart turns out to be a true portent, then we will have to fix on some date in the second half of the twentieth century as a watershed marking: the division between two quite different notions concerning the nature of art.
This of course, is what the conceptualists and other quasartists would like to achieve.
But is seems unlikey their theories will effectively replace a tradition enriched by experience and of such dynamic character.

EXPLORE
It is more likely these revolutionary contributions will in time be studied as interesting though aberrant forms thrown up by a culture undergoing a sharp nervous crisis.
Whether one thinks of such works as inspired or misguided, they cetainly help to make the exhibition a stimulating eperience.
Works by Gunter Christmann, who won the Hunter Douglas Luxaflex Prize, Col Jordan, Joseph Szabo, Guy Warren, William Peascod, Michael Schlieper or Giselle Antman, which yesterday would have seemed daringly avant-garde, are suddenly seen as establishment pieces threatened by a new wave of radicals.

Donald Brook was in agreement that this exhibition was symptomatic of art reaching a sort of watershed  but he was pleased to see it as an occasion to put the boot into formalism and by implication the CAS’s recently retired long term president, the artist, critic, advocate of formalism and unrepentant cold war warrior Elwyn Lynn:

The Contemporary Art Society of NSW has not developed as one might have hoped into an Institute of Contemporary Art on the London model.
Instead it has remained a loose association mainly of artists struggling along from one committee take-over to the next inside a framework of earnest meetings and depressing exhibitions that used to be dedicated to the great Australian post-Dada anti-art tradition of the fair go.
But the last two annual exhibitions have been different. Last year the show had a firm style bias that transformed it (unfairly) into something pleasurable to see.
And this year, although variety is back, there is a lively sense of attack and involvement in new ideas.
There is, indeed, about as much post-painting as there is painting, and the society seems to be on the brink of abandoning its 32-year-old conviction that the only real art form is the handcrafted, wall-mounted coloured rectangle.

They  just don’t write fun reviews like those any more. A year later Donald Brook reproduced the top photo in an article he wrote on young Australian artists for the UK art magazine Studio International.

But all of that begs the question of what on earth did I think I was doing. For much of 1970 I had been preoccupied with defining the essential characteristics of art, as Gleeson and Brook both recognised. On the one hand you could see this as a dadaist gesture, art being contemptuously treated as a doormat, but although it had that provocative gesture aspect that just wasn’t my thing. In fact it had come about as a natural extension of 1969 works that manipulated gallery spaces by outlining them with rope or tape or extending them with extra walls or corridors. As a result I then became interested in controlling the way people moved through the spaces and the way they interacted with each other. But there was another issue related to defining what physically constituted a work of art.  I increasingly used parts of the gallery and gallery fittings or incorporated other pre-existing objects into the work so that it became increasingly difficult to define what was or was not part of the art work. There was certainly no simple object hand made by the artist that could be defined as the art work. Thirdly I was irritated by performance art which I considered little more than bad theatre or on the rare occasion that it was not boring then it was little more than mediocre theatre. It did nothing to question the essential viewer/artwork(or artist performer) relationship that concerned me so I decided to turn it on its head and make the viewer – if they could be called that – into the performer. If the viewer did not perform the artwork then it did not exist, the action and consequences were the art work, not the physical bits of sponge rubber. Essentially in the end rather than creating art works I was setting up conditions in which art works of a sort could occur, in this case the audience could stumble in an uneasy way across the suddenly unstable floor surface.

These seem to be the original rough drawings: 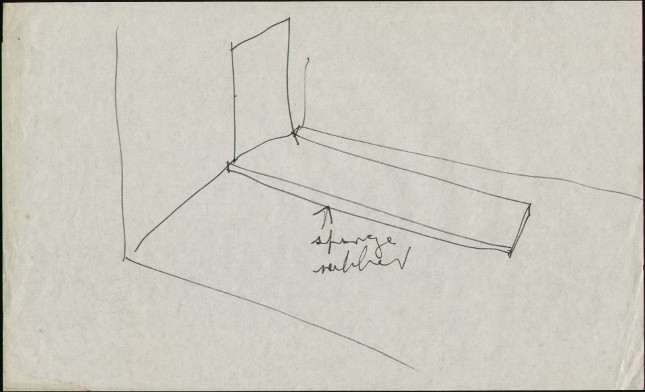 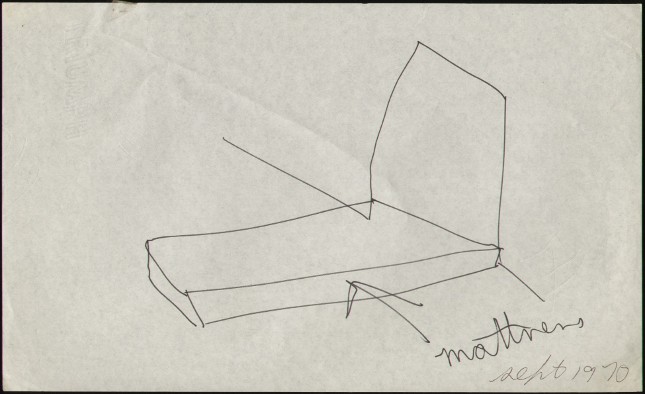 In the formal drawing that followed it is grey sponge 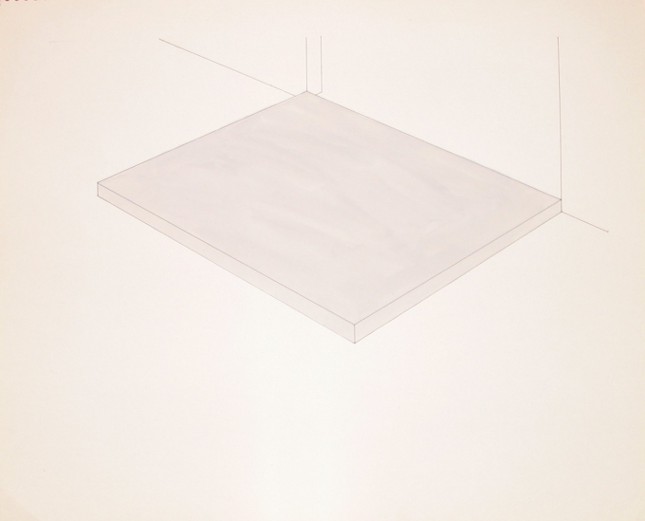 but in the drawing done for the specific installation it is blue. 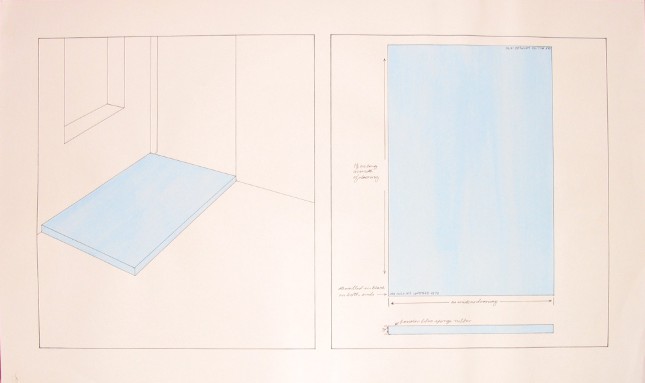 At that time in early to mid 1970 I did drawings for an incredible number of works around doorways, blocking them, extending them,  manipulating the rooms behind them. There are dozens of variations for even the simple scenario of putting something in front of a doorway that must then be walked over, everything from water or flour or sugar , 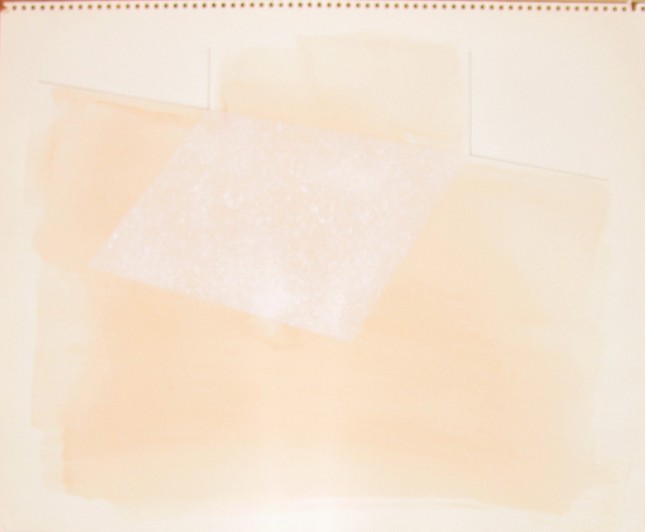 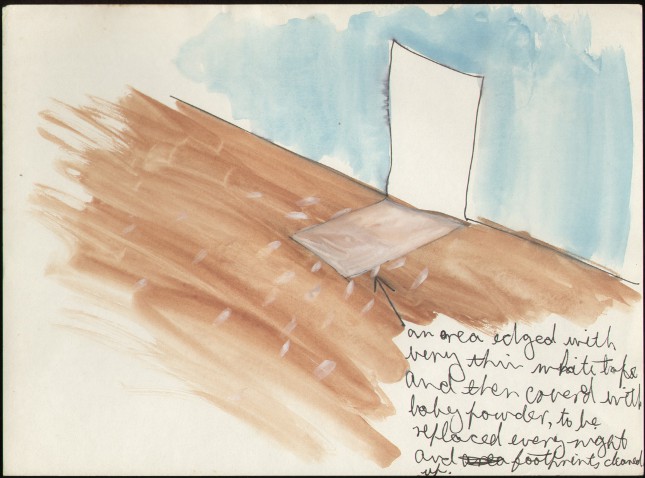 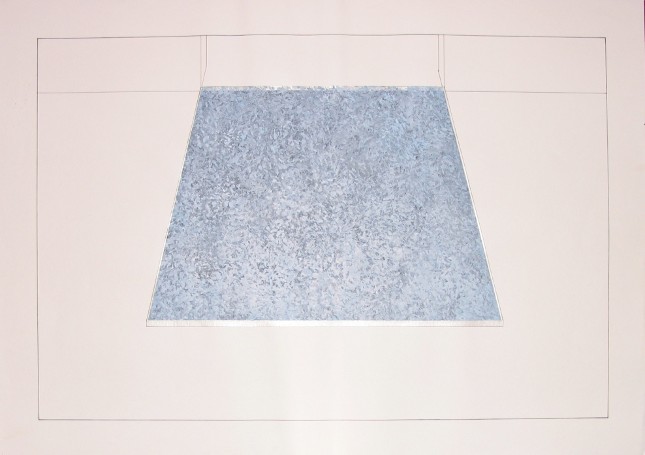 Looking at them now I find it impossible to hide the fact that there seems to be some sort of personal psychological issue involved. It seems I was struggling to get through to somewhere else but I couldn’t quite do it and these works seem to symbolise that. By the end of 1970 I had passed through that doorway because I finally worked out the way forward. A whole different phase began where I had a decreasing need to produce exhibitable objects of any sort.

The work has been shown twice since 1970. It was in Off the Wall / In the Air: A Seventies Selection (curator Jennifer Phipps) at ACCA Melbourne in 1991 and in Monochromes curated by  David Pestorius at the University Art Museum, Brisbane in 2000. At the ACCA exhibition it quickly became a real eyesore, caked with mud walked in from the gallery’s garden setting. At the Monochrome exhibition it was set outside the lift where it remained monochrome for the first ten minutes of the exhibition. Perhaps it was to preserve its monochrome nature or perhaps it was for the risk averse insurance regime of the 21st century that the lift was soon switched off and people were prevented from walking on it for the rest off the exhibition, or so I was told. You have to laugh. Future versions will no doubt be handled with white cotton gloves. In the case of the original, when I got it back I gave it a good wash and used it as a mattress for the next few years.

Incidentally the original  photo was taken by the sculptor Noel Hutchinson and the sandal wearing gent is Weaver Hawkins, an extraordinary artist who was an original member of the Vorticist group, badly injured in WWI (hence the awkward looking arm) and later migrated to Australia. At the time I found his work a bit odd and disconcerting, too strange to even be described as unfashionable, now I admire it tremendously, particularly the landscapes and although I was acquainted with him I wish now that I had been better friends with him and talked to him more.