This probably seems an odd thing to start with but there is a reason. They illustrate a problem both with the way my work is seen and the general misunderstanding of what an artist does. 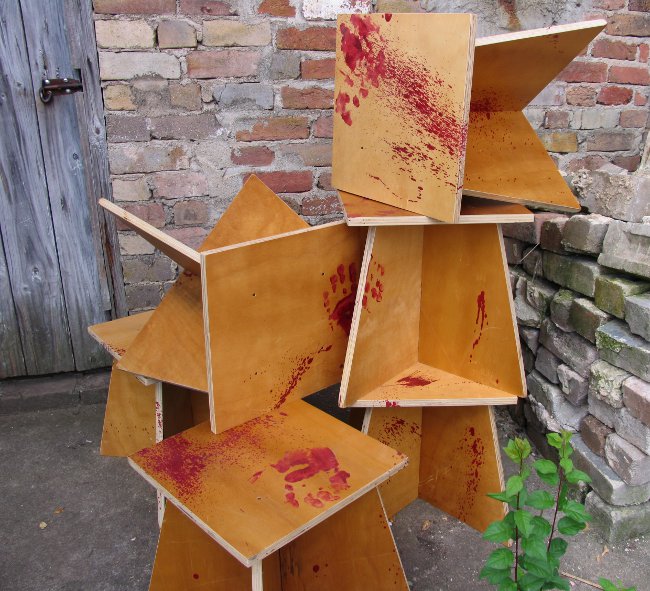 First, what are they? They are a set of ten stools made of recycled varnished plywood with painted blood stains and hand prints on nine of them. 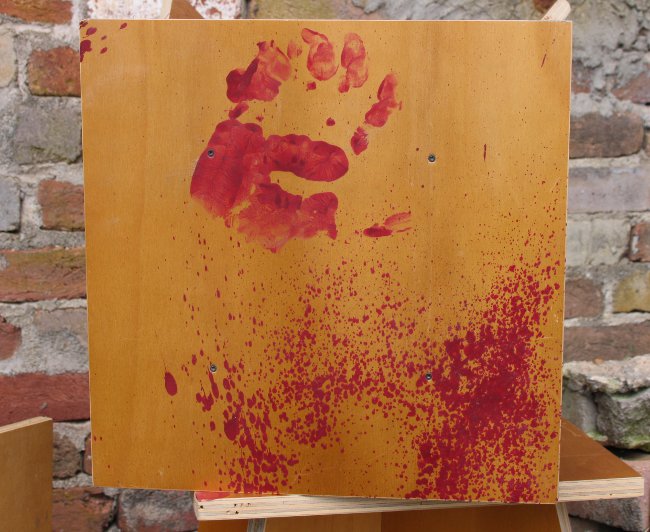 The plywood was part of several ute loads of plywood pre-fab audio visual stands that came from an AV hire company that rented them out for events like Melbourne Cup parties.

They were getting a bit old and shabby and were due for replacement in July 2007 but rather than dump them one of their employees Peter Jackson (himself an artist) sent out a message on the Network of Uncollectable Artists message board for any one interested to come and take them away. 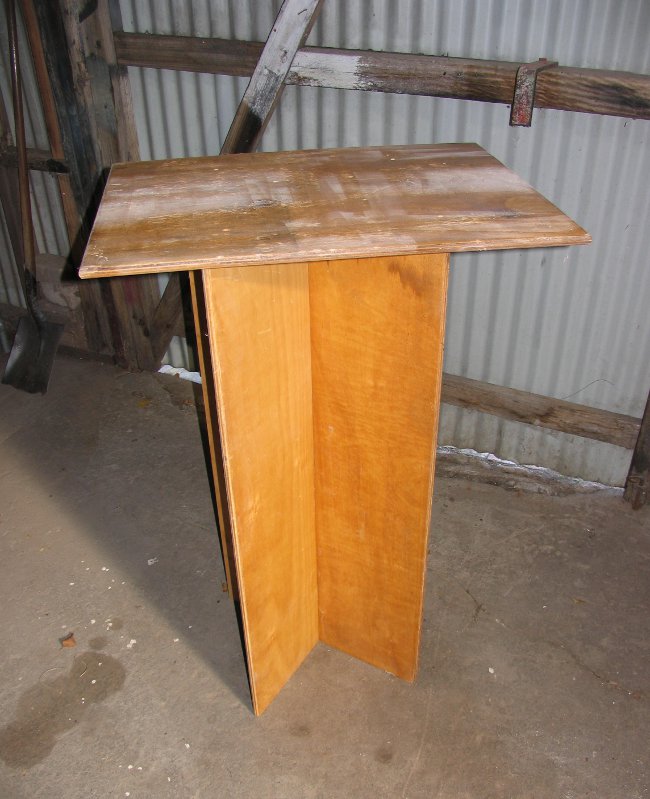 In the end I was the only one who wanted any so I got nearly all of them. I gave some of the plywood away but in January 2008 when Mickie Quick invited me to participate in the Gang Festival I decided to make some stools by modifying the stands. I reduced them in size and reshaped them while retaining the structural slotted construction. I then screwed them together, added four small glue blocks for rigidity and then painted them or rather I splattered them. 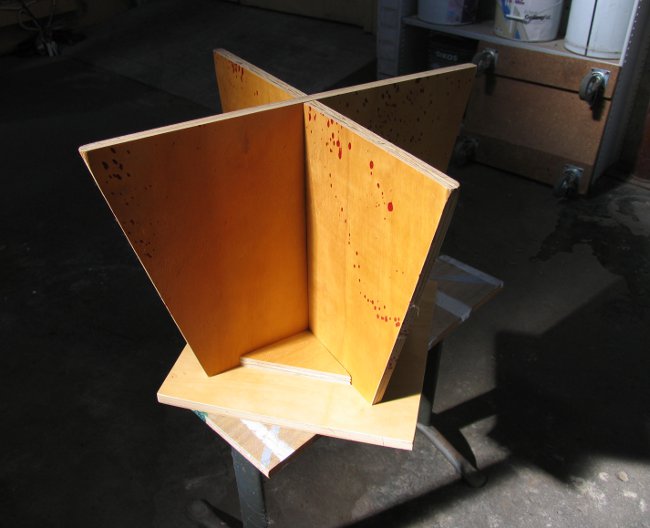 So what I did for the Gang Festival was some painted furniture? Well, no, actually I was doing something else entirely  (although when I’m feeling mischievous I tell people that all I do these days is make painted furniture out of recycled wood, I like the way it sounds so folksy kitsch). The call out that Mickie sent me said

Gang is seeking visual artists interested in having their work included in the lane ways surrounding Peace Park and Pine St.
Gang takes its name from the Indonesian word meaning alleyway or small side street and commenced life in 2005 as a celebration of the deep links between independent art spaces and collectives across the two countries…. The kampung street festival is a celebration of the fringe and the marginal, and the creative spaces generated by artist run initiatives.
Our focus this year is on sustainable environmental arts practices … The specific brief for the outdoors exhibition is to extend these themes of reuse and rubbish in the Sisa exhibition to include questions about what and why we consider a thing “of use” or “useful”. What makes a thing of use? (use/ful) What makes a thing no longer of use? (use/less) How do we determine the right usage of a thing, a word, a street, a day? Why do things become under  utilised or over utilised?

That easily covered the recycled plywood bit, but my real concern was the use of public space which was at least implied in Mickie’s email. My interest in the conflict between community, corporate and political control of urban space went all the way back to the early 1970s when I was active in green bans, resident action groups and squatting. In the 1990s I had spent some time working in Jakarta where lane ways are used as extended living areas then in 1999 I spent several months in Boca Raton, Florida, the extreme opposite where the only public space is the highways and even shopping malls are so controlled they almost have a dress code (if not a skin colour code). I became obsessed with issues around public space particularly the right to just loiter and the government and private attempts to deny or control it. I was obviously not alone in my interest because it was around this time that Sean Goodsell produced his designs for park benches, bus shelters and later picnic tables that could convert into sleeping places for homeless people. I was a particular fan of a (now disappeared) website The Anti Sit Archive that was filled with photos of devices to prevent public sitting. 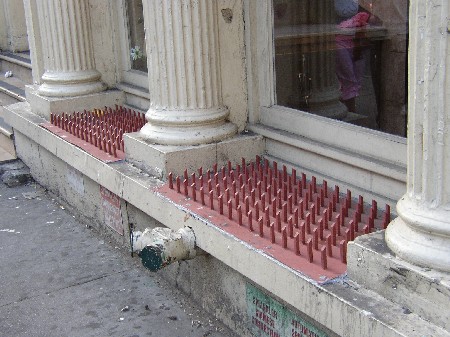 Above all loitering is an issue about the commons, that everybody owns the city and has a right to be in it and it is one of the many small battles that must be fought against the creeping totalitarianism of western society. That is why I made the stools, so that visitors to the festival and the lane way exhibits could sit down , hang around, chat and basically comfortably loiter in the street. The artist’s job is not necessarily to make stuff, it is encourage adaptive cultural change so to the degree that I made a “work of art ” it was not a bunch of stools, it was to be people loitering, the street converted into a place for socialising and the stools were just the means to that end. Incidentally I notice that recently someone in New York had a similar idea.

But it was not to be. The night before and the day of the festival was non-stop torrential rain. The whole thing just got added to my list of “What Didn’t Happen”.  In fact ultimately the stools first public appearance  was in my later 2008 exhibition at Mori Gallery called Grave Goods. There they joined another set of stools made for a completely different reason and one of the most amusing aspects of the opening was the way people stood and looked at them rather than sat on them. 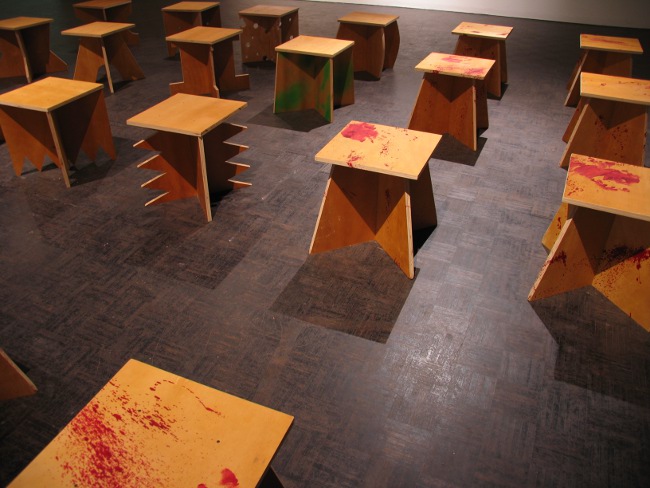 At least I sat on one of them and on occasion I still use the tables from that exhibition for big lunches. 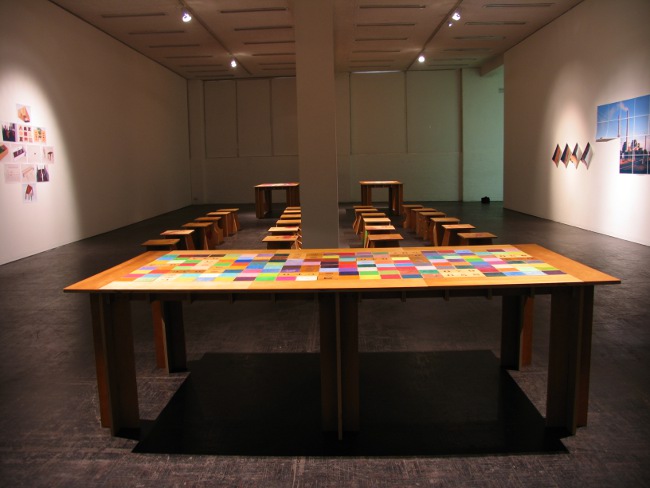 Finally, why the blood stains? Because we live in a murderous world plastered in blood and shit, but mostly we are blind to it.