In the mid 1970s I was thinking hard about the relationship between art and other forms of work while reading the great American journalist  and oral historian Studs Terkel – his 1974 book Working: People Talk About What They Do All Day and How They Feel About What They Do remains a classic and an inspiration. Terkel, like PA Yeomans, was one of the people I saw as an example of the cultural activist as artist and his focus on the lives of ordinary people reinforced the way I was thinking of daily life as the critical arena for cultural innovation. In the process it occurred to me that what I might do was start some sort of news service about work and culture and politics, rather like his radio programs. These days you would just start blogging but then I couldn’t see how I would ever be able to do it so it just sat around in the background as an idea that would never happen.

But it was only a few years later that we set up Union Media Services Pty Ltd (UMS). I’ll talk about that in another post but for the first few years in practice it was mostly a full time working partnership between myself and a trade union journalist, Dale Keeling. Dale and I quickly realised the advantages of sharing material between the many publications we were soon producing and we even discussed organising it as a news service we would offer to other unions. In particular we shared cartoons between publications. We even fantasised that the combined readership of numerous trade union publications could form a sort of distributed  alternative media that could  at least start to balance the iniquitous propaganda of the mass media.

A bit further down the track, Dale was gone but within UMS we still shared material where we could. By 1983, I think, we were producing all of the Australia Council’s publications but we were particularly involved in their trade union based Art and Working Life (A&WL) program. In the course of discussions about how the program could be extended and further publicised I came up with a version of my original news service idea. I proposed that we could provide union journals,  which almost all followed similar formats and were always desperate for interesting content, with entire pages, written, laid out, with photographs printed on hiqh quality paper that could simply be pasted in to the artwork for their existing layout without any additional work. 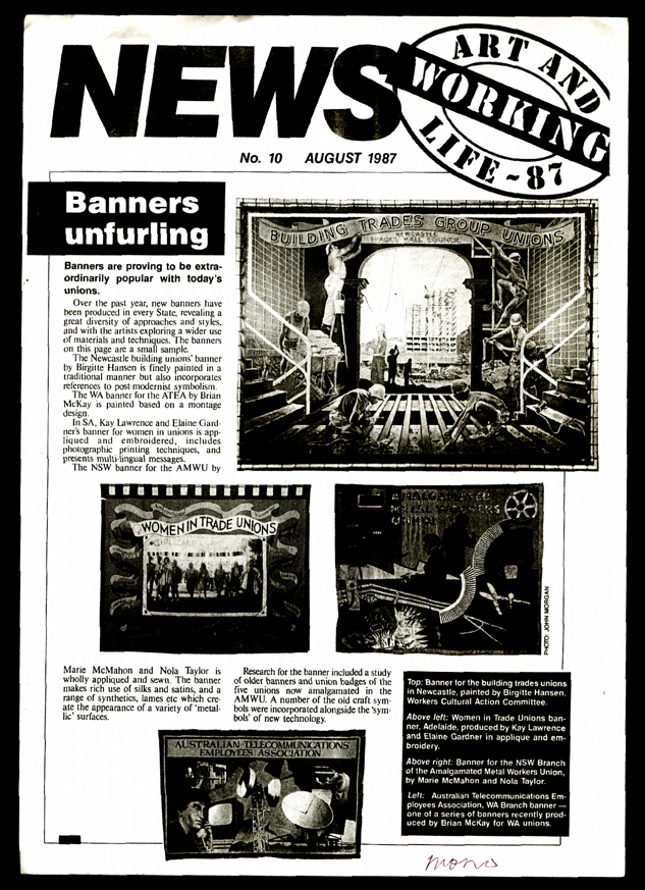 The Australia Council’s program administrator Deb Mills agreed and away we went. I designed a logo. Michael Davies did the art work. The content came from a variety of sources – ozco, the artists, etc – and Ian Burn mostly wrote it up.  We produced one page a month, each covering a different  A&WL project. It continued long after I left Union Media and covered a huge range of projects.

Meanwhile our influence had brought about a slow but major improvement in the way unions dealt with their internal communications. In the late 1980s the ACTU appointed a journalist, Andrew Casey as communication officer. He took the A&WL news service model, adapted it and began an ACTU news service, sending out a whole range of trade union and political stories in a format similar to the one we had developed. Suddenly, for the first time ever, a consistent story began to appear across most of the trade union movement for an audience that rivalled the mass media in size. The value of this was apparent in the 1993 federal election where the co-ordinated response of union communications played a major role in winning a supposedly unwinnable election – “one for the true believers” as Paul Keating famously described it.