Usually when you hear the name Vladimir Tatlin you think of his proposed 400 metre tall Monument to the Third International, a project that was never built but if it had been would now be regarded as one of the wonders of the world. 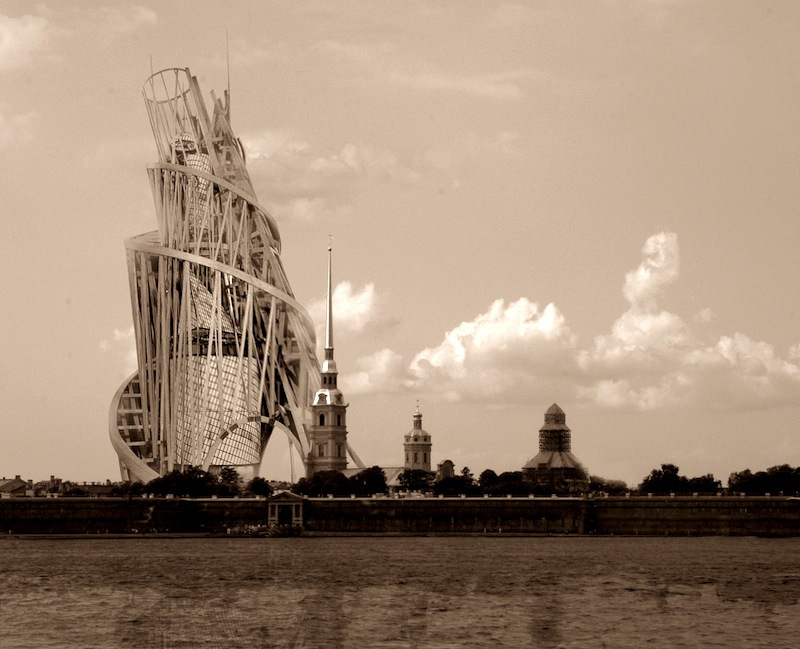 But there was far more to Tatlin than that. In fact, for me, he is the greatest of all twentieth century artists. 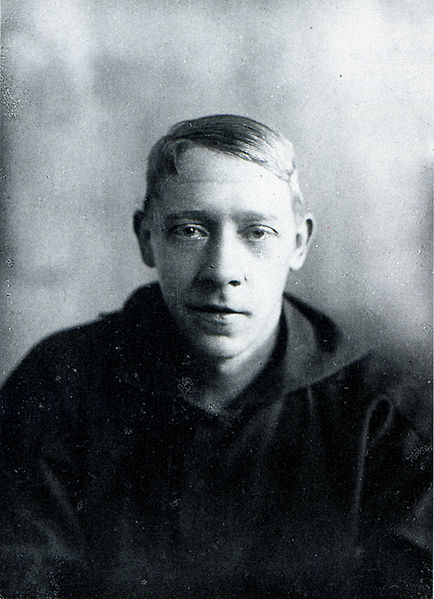 As one of the two main founders of Russian Constructivism he has an assured place in the history of modernism but when his life is seen in its entirety he can be recognised as an artist as important in his way as Picasso or Duchamp because he represents another distinct strand of modernism that is only now becoming dominant, the strand that blurs art and life together so completely that they become almost indistinguishable.

This was what attracted me to his work in the early 1970s. I was looking for earlier artists that might somehow illuminate the way for me, help me to understand the logic that was unfolding almost beyond my control in my own work. Tatlin, Mayakovsky, Rodchenko and the Productivist movement were among the very few precedents that were helpful but it was incredibly difficult at that time to find out very much about them. 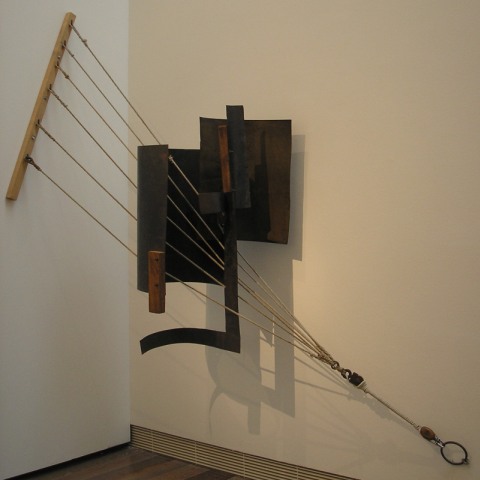 In fact it was decades before I could find a brief but complete summary of Tatlin’s life. Until then I only knew that after the Russian revolution he had stopped making art works and instead concentrated on art education and museums, remaking the cultural infrastructure in other words, then moved on to industrial design of clothing and stoves and that he was interested in aeronautics. This had given me inspiration at the time, paralleled my own development from artworks and exhibiting to cultural and then political activism and it reinforced my belief that utilitarianism was essential and that my activities as an artist must have effect in the real world rather than just entertaining an art world audience, but it turned out to be far less than the complete truth. 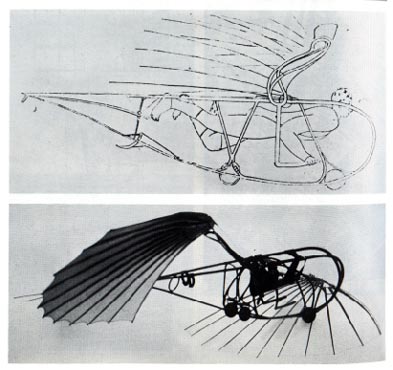 The conventional interpretation is that he was serious in his attempts to design a flying machine,  the letatlin. Certainly he pursued it with an intensity which eventually created the impression that he was quite crazy, an impression that may in fact have ultimately saved his life when other associates like Nikolay Punin died in a Siberian gulag for criticising official portraits of Lenin as “tasteless”.  But I find it hard to believe that the letatlin was not a subtle satire on what had happened to the revolution and to the hopes for a revolutionary culture, by then degenerating into an impossible dream as likely as a flying bicycle for every worker. Tatlin quietly abandoned the project in the early 1930s and slipped off into theatre design and flower painting where he was regarded as an irrelevance not even worth persecuting.

As more information came out in the 1990s I heard his wonderful statement “I am an artist, I provide ideas” which perfectly summed up my own feelings about what it was to be an artist – memetic innovation, as Donald Brook described it. It was also clear that despite his radicalism he had never become a simple propagandist of any sort. And to my amazement I discovered the  flower and still life paintings that filled the latter part of his life. 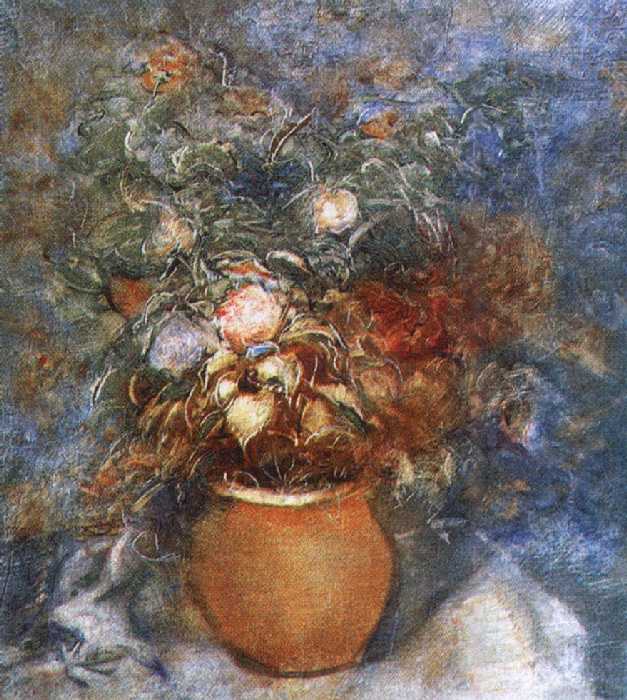 While at first they appear conventional they can easily be understood as a sort of quiet rebellion against the political repression that had taken over in Stalinist Russia. Sometimes the most effective rebellion is a sort of dumb following of orders … almost. When politicians would prefer artists to not have ideas, to just shut up or at least stick to harmless pretty decoration like flower paintings, it probably never occurs to them that even flower paintings can have a feeling of sullen discontent and a still life can be a way of twisting the knife. 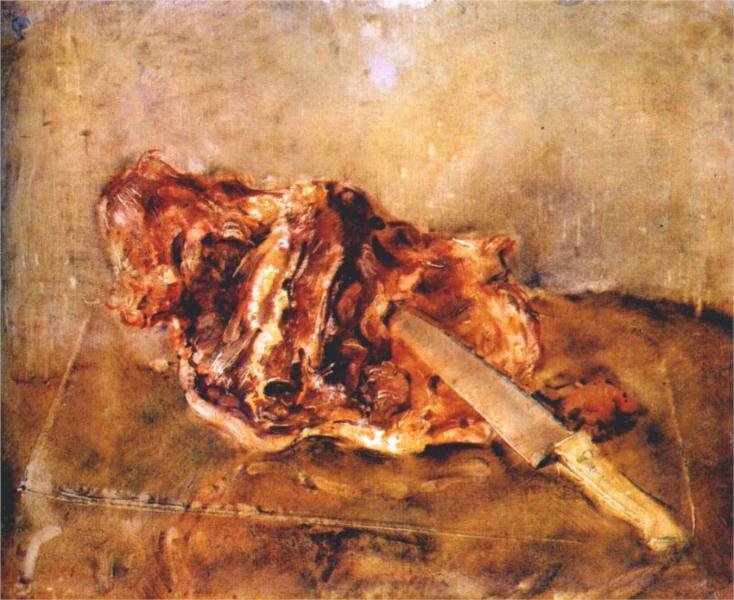 His final years, marginalised, ignored and irrelevant (although the authorities took enough notice of him to officially declare him  “An Enemy of the People” in 1948) also struck a chord in me at a time in the 1990s when I was most distant from the official art world, vilified by a few and by most regarded as a failure who had given up art in the 1970s. I had never suffered anything remotely like what happened to Tatlin and the other constructivists but I had certainly discovered what it meant to be ignored. Again, a life I could identify with.

And so it came about in the early 2000s that I began to think about flower paintings and politics. The first thing I did was a collaboration, Chinese Whispers, with my close friend Guo Jian, himself a  political refugee from China as a result of his involvement in Tienanmien Square.

Then in 2013 for my recent survey exhibition Notes On The Works at Artspace I produced the first version of Homage To Tatlin. 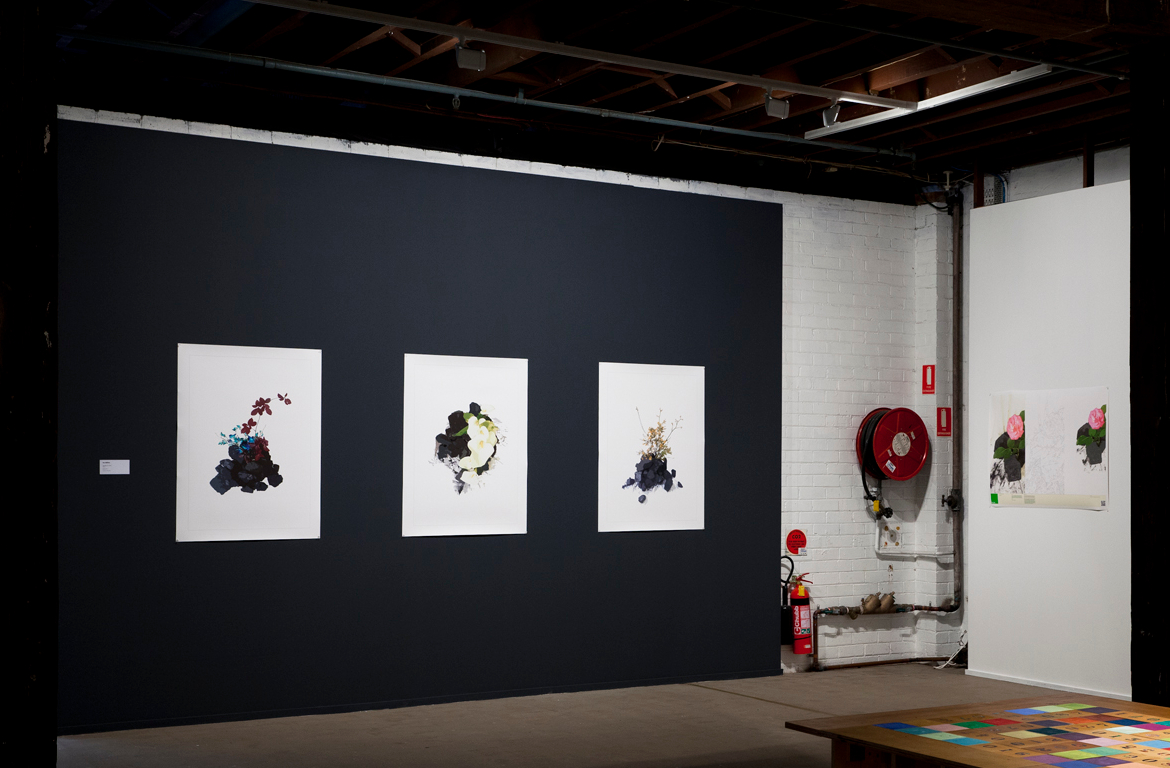 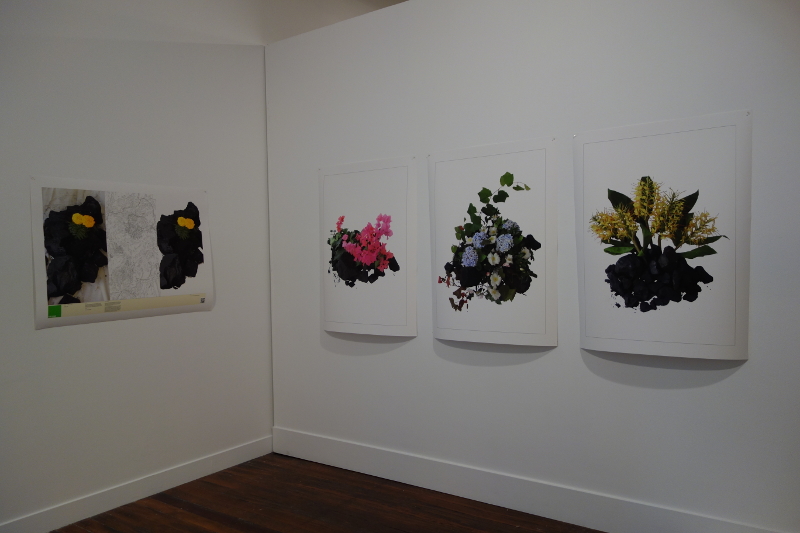 I will probably produce further versions at some time.

Basically this work superficially appears conservative while openly flaunting the techniques it uses to create that impression.

Each version consists of four digital prints. One print is a description of the process involved in making the other prints which despite appearances are not paintings or woodcuts but are photographs that have been converted from raster to vector using a tracing program then edited and slightly recoloured using drawing and paint software. This is the sort of process that is usually looked down on in the art world where the magical touch of the artists hand is still (absurdly) valued and so would probably only be used by amateurs or commercial illustrators. I have never seen anyone actually present images treated like this in a serious gallery. Essentially these are photos that have been processed by computer technology to mimic painting, an earlier technology that still has higher cultural status. 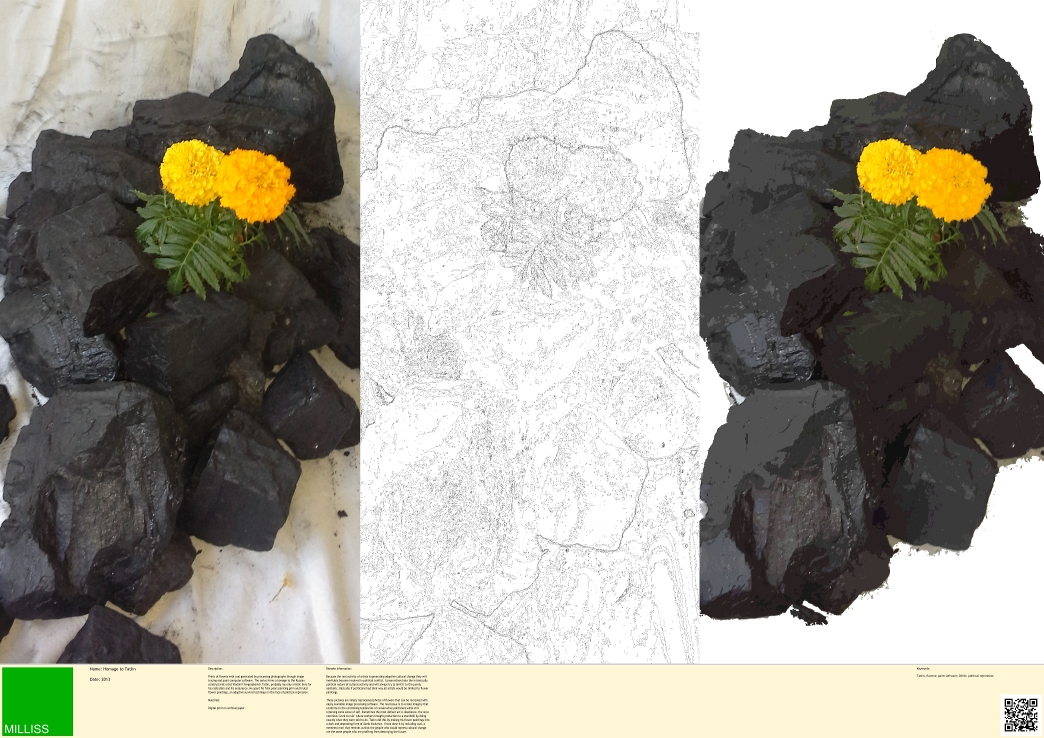 The text describes the process and the origins of the work and how it could be remade if necessary. The QR code links to this blog post which is effectively part of the art work but not present in the gallery space although accessible via the code. 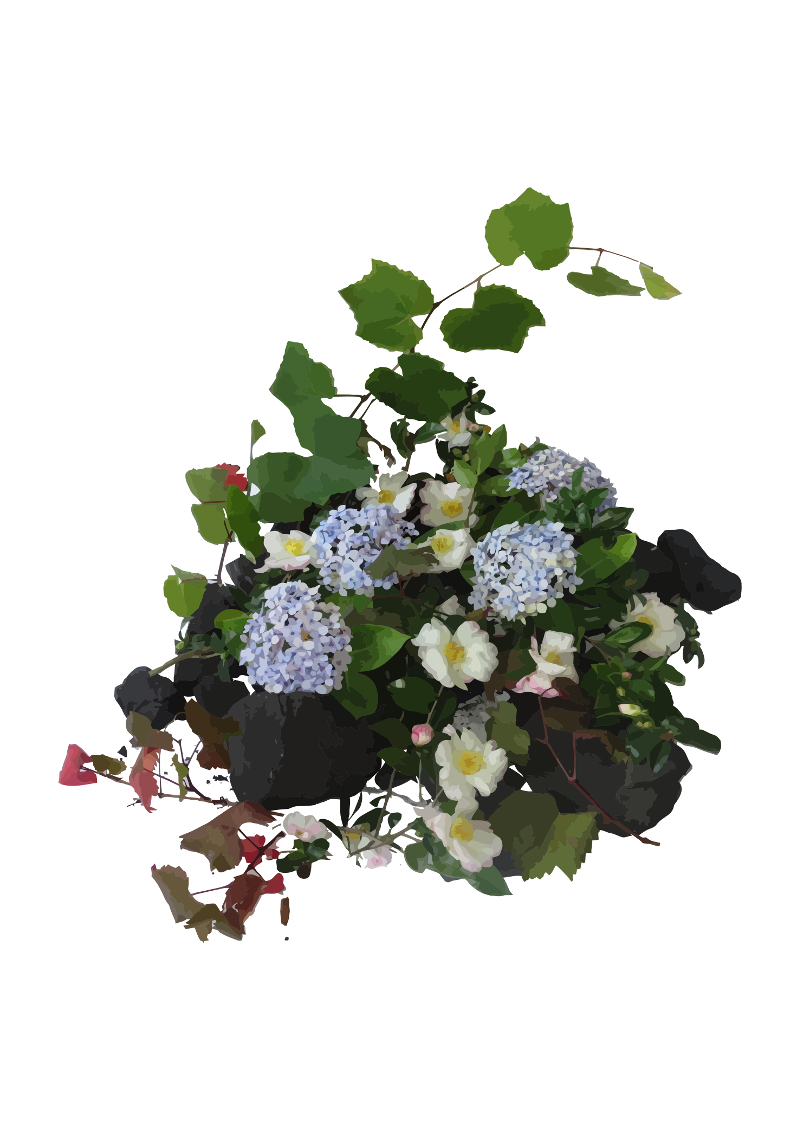 The flower images themselves are consciously aesthetic in a way that disguises their real subject, the coal that is draped with flowers. They are in fact a memento mori for a planet about to plunge into mass extinction because of our use of fossil fuels.

These works are being made at a time when Australia is sliding into fascism and when politicians are increasingly targeting the arts as well as all other forms of media which are now expected to produce propaganda in support of corporations and right wing neo-liberal policies. Although we are still a long way from the repression suffered by Tatlin  we are nonetheless also a long way down the road that produced that repression. So again in my declining years I can identify with him and the strategies he chose as an artist.

Here are a series of articles and interviews about a 2012 exhibition on Tatlin at the Museum Tinguely in Basel, Switzerland, one of the few major institutional attempts to deal with his work and complex historical position.

An interview with Roland Wetzel, director of the Museum Tinguely

An interview with Gian Casper Bott, curator of the Tatlin exhibition

An interview with Anna Szech, art historian at the Museum Tinguely