Stephen Jones’ book Synthetics : Aspects of Art and Technology in Australia 1956 – 1975 was launched last week at the AGNSW. 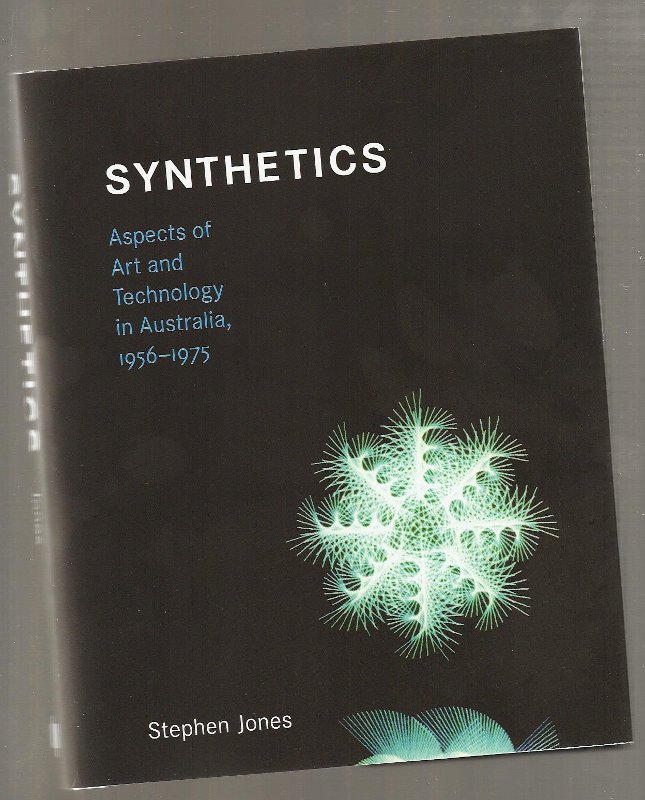 For someone like me who has complained for decades now about the way Australian art history of that period was being written this book is a real breath of fresh air. So I’ll get the declaration of interest out of the way – Stephen and I have been friends for 30 years or more at least and I even get a few passing mentions and a thanks in the book but since I never used much technology in my work it’s not at all about me. But it is about my friends who were involved in the use of new technology – Donald Brook, Marr Grounds, Bert Flugelman and the rest of the Optronic Kinetics crew, David Smith,  Peter Kennedy, Tim Burns, David Ahern, Phillipa Cullen, Mick Glasheen, Albie Thoms, Dave Perry and many many more. The book sets out to be a seriously well researched resource and above all Stephen writes about what actually happened in Australia rather than “what happened that looks like the US and European narrative?” or “something in a book will make that look like a better  investment” or  “you just wouldn’t believe how lovable and brilliant he was, he did everything” or “he was really really important because he was a minor player somewhere other than Australia” or – no,  let’s stop there and yes, it is almost invariably “he”.

In particular there has been a tendency for the late 60s and early 70s to have been written about by writers that were overseas at the time and they focused on artists that were also overseas at the time and they write about things that didn’t happen in Australia as if that was Australian art history. For a variety of reasons, but mostly the vested interest and personal biases of those writers and then the generations of students they manufactured in their own image, it has been almost impossible to challenge that false history.  Stephen makes a pretty good attempt at contradicting earlier writers simply by presenting a documentation of what happened in one particular interest area and one particular time frame. He has a bit of fun with the fashionable theory obsessed writers of the 1980s:

It is interesting to me that although Burn claimed that capitalism was the prime source of the censorship of new art forms that were launched onto an unsuspecting art public at various times, he himself in his most polemical article The 1960s: Crisis and Aftermath had done exactly the same thing by completely ignoring the proliferation of experimental and technological forms that were (though lacking a marketable form) emerging among a small coterie of the avant garde. This was censorship through ignoring the new. He wasn’t the only one. The experimental use of new technologies in art was also ignored entirely by large sectors of the art critical fraternity, especially those who regarded themselves as the gatekeepers of what was new and politically acceptable.

In fact, in reading the articles by Ian Burn, Patrick McCaughey or Terry Smith in Paul Taylor’s Anything Goes, a compilation of articles drawn largely from his journal Art and Text, it appears that despite the name of the collection in which all of these authors and others appear, practices other than painting or sculpture and perhaps their conceptual antagonists were not even worthy of the attribution “art”. It is clear that anything did not go at all and that there was a fundamental rift between the fine-art world and those whose interests in art were the potential of newly available electronic technologies.

He is writing here of the time when Ian Burn and I were working together and he is correct about Burn’s concern with conventional art world validation, an issue that was at the heart of our later falling out. I can still remember Burn’s po-faced indignation at Art and a Texta, Ted Hopkins’ cruelly satirical parody of Art and Text, and his annoyance at my gleeful readings from it – but that’s all another story. The real story is Stephen’s well researched and generous overview of an extraordinary range of activities and artists that now look much more like the real forebears of our present state than the unreadable faux theory of the 1980s.