The Arcadia Tables are an ongoing series of tables that I have been building over the last few years, furniture that is also memento mori based on the Latin phrase “et in Arcadia ego”, the knowledge that even in the happiness of Arcadia there is still always mortality. 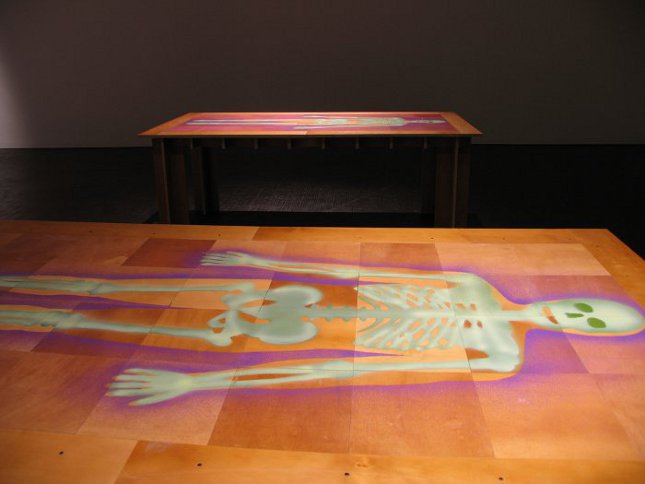 The first two were exhibited in my 2008 exhibition, “Grave Goods” at Mori Gallery in Sydney. Spotlit from above they were intended to appear more like two great sarcophagi than just tables. 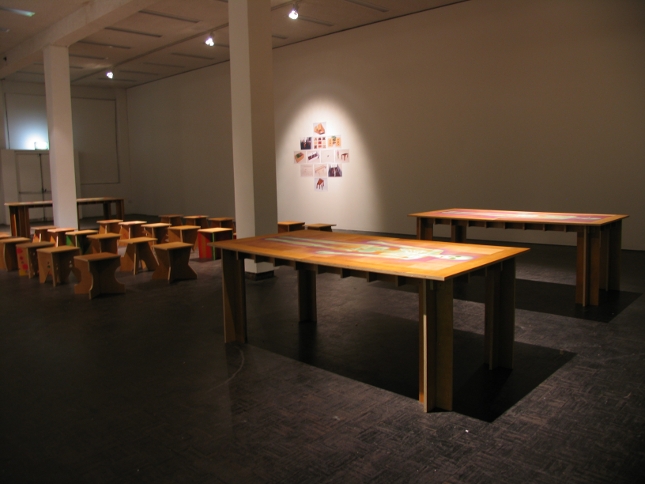 They are constructed from re-used plywood television stands and were made using a type of torsion box construction that produced a strong unit out of the long thin off cuts from the earlier stools that I had been making. 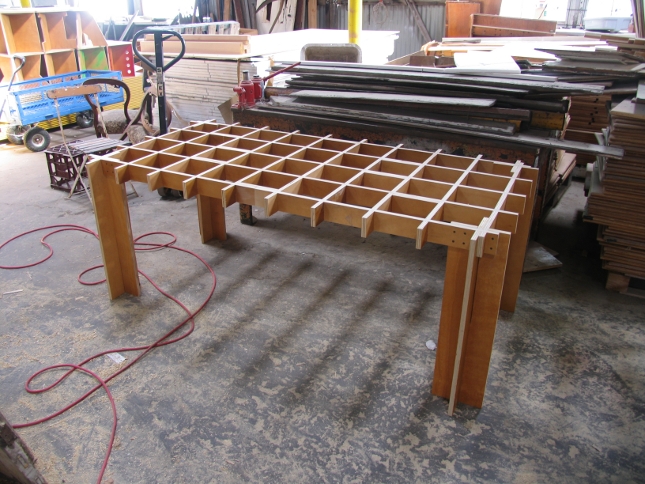 The construction technique is clear in this studio photo. 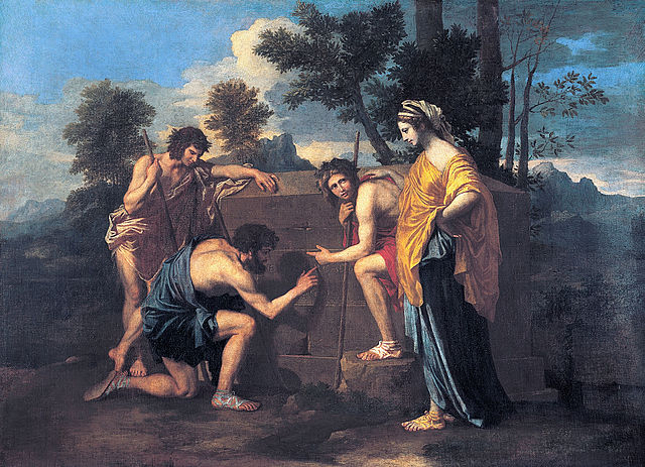 And while the title is a reference on the one hand to Nicholas Poussin’s The Arcadian Shepherds, one of the great masterpieces of western art and one that I had admired all my life, it also refers to the personal situation I had found myself in.

By the late 1990s I had pretty much worked through most of the things I had set out to do in the 1970s, although often not very successfully. Part of that had been to explore a whole different range of ways being an artist, at least in the sense of the artist as a cultural activist, but the one thing I had not done much of was being an artist in the most conventional  sense, manufacturing physical objects for trade in art galleries.

It wasn’t that I had any desire to return to the conventional art world although I knew it would be seen like that, it was more that I wanted to broaden a bit further the range of things I had done and I wanted to do it by treating conventional art simply as a format peculiar to a particular audience rather like the trade union journal. I specifically wanted to avoid the usual art world game, I was not interested in advancing current fashions etc, I was purely interested in effectively presenting meaning. I began in 1999 by doing a series of paintings while in the US. I did a few more in the early 2000s but my heart wasn’t really in it, I found it far too limiting. But making furniture into installations was a bit more exciting even if it did seem an unlikely way of dealing with my other priority, I had reached that point in my life where I wanted to make a bit of a tribute to some of the things I had most admired – I think it’s one of those things that just comes over you with age. And I was starting to feel old, tired, and just wanted to potter around my shed.

But that was the other part. These really are very personal works, that whole “Grave Goods” exhibition is. Most of my life had been stressful and depressing and by the late 90s I was stuck in a toxic semi-relationship and slowly sliding towards early death. Then one day Terry Smith sent Wendy Carlson, his research assistant, to interview me for a (never published) book he was doing on the history of Australian conceptual art. She commented to me at the time that every one of us she interviewed was showing our age by being obsessed with death in one way or another.

Over that time we were slowly drawn closer and closer together until like a lost dog she took me by the ear and dragged me into a new life. I had barely the energy or hope left in me to do it and yet together we have both made new lives together.  And as it happened the first really personal time Wendy and I ever spent together was in the Met and the Frick in New York talking about paintings like this and then a week later in Paris where we spent a week visiting tombs and cemeteries.  By 2008, when we had been together for a few years, I was shocked to realise that probably for the first time in my life I was genuinely happy, even though there were health problems hence it really was a case of “et in Arcadia ego”.

I think the Wikipedia interpretation of Poussin’s painting addresses a lot of what I was feeling at the time I made the tables:

… in the latter version, one of the two shepherds recognizes the shadow of his companion on the tomb and circumscribes the silhouette with his finger. According to an ancient tradition (see Pliny the Elder, nat. Hist. XXXV 5, 15), this is the moment in which the art of painting is first discovered. Thus, the shepherd’s shadow is the first image in art history. But the shadow on the tomb is also a symbol of death (in the first version symbolized by a skull on the top of the tomb). The meaning of this highly intricate composition seems to be that, from prehistory onward, the discovery of art has been the creative response of humankind to the shocking discovery of mortality. Thus, death’s claim to rule even Arcadia is challenged by art (symbolized by the beautifully dressed maiden), who must insist that she was discovered in Arcadia too, and that she is the legitimate ruler everywhere, whilst death only usurps its power. In the face of death, art’s duty—indeed, her raison d’être–is to recall absent loved ones, console anxieties, evoke and reconcile conflicting emotions, surmount isolation, and facilitate the expression of the unutterable.

Likewise I traced our shadows together in death and I also wanted to connect to the art history that had formed my life even if my life had turned out to be deeply flawed. I didn’t see art in exactly that way and I couldn’t claim to have produced anything as great as the Poussin but it certainly was meaningful for me.

Finally, the tables are actually usable and we have had dinners on them with friends. The idea of food and the good life colliding with love and sex and death brings to mind my favourite poem, a little known seventeenth century epitaph by Lady Catherine Dyer for her husband

My dearest dust, could not thy hasty day
Afford thy drowzy patience leave to stay
One hower longer: so that we might either
Sate up, or gone to bedd together?
But since thy finisht labor hath possest
Thy weary limbs with early rest,
Enjoy it sweetly: and thy widdowe bride
Shall soone repose her by thy slumbring side.
Whose business, now, is only to prepare
My nightly dress, and call to prayre:
Mine eyes wax heavy and ye day growes old.
The dew falls thick, my beloved growes cold.
Draw, draw ye closed curtaynes: and make room:
My dear, my dearest dust; I come, I come.

Sex and death, illusion and reality, the only worthwhile themes in the end when all is seen to be vanities.